The events of Friday not only speed the eventual collapse of the Bullion Bank Paper Derivative Pricing Scheme, they also highlight the fraud of this current system and shine light upon the utter desperation of these Banks to maintain it.

We’ve written about this countless times over the past six years. Here are just two recent examples:

In short, as a measure of controlling the paper prices of gold and silver, The Bullion Banks that operate on The Comex act as de facto market makers of the paper derivative, Comex futures contract. This gives them the nearly unlimited ability to simply conjure up new contracts from thin air whenever demand for these contracts exceeds available supply and, almost without exception, these Banks issue new contracts by taking the short side of the trade versus a Spec long buyer. Never do these Banks put up actual collateral of physical metal when issuing these paper derivative contracts. Instead, they simply take the risk that their "deep pockets" will allow them to outlast the Spec longs and, without the risk of having to make physical delivery, The Banks almost always win. Eventually, an event like the runup to the Brexit vote or all of the Fed Goon jawboning of May will spook The Specs into selling and this Spec selling is used by The Banks to buy back (cover) their ill-gotten naked shorts and lower total open interest back down. (If you’re confused by this, please click the second link listed above for a more detailed explanation of this process.) How this influences price is simple. If the supply of the paper derivative futures contract was held constant on a daily basis, then price would have to rise or fall based upon simple supply/demand dynamics. When the amount of buyers exceeded sellers, price would have to rise to a point at which existing owners would be willing to sell. But this is NOT how the Comex futures market operates! Because the market-making Banks have the ability to create new contracts from whole cloth, they can instead flood the "market" with new supply whenever it’s necessary. This mutes potential upside moves by imparting fresh new supply for the Spec buyers to devour. Price DOES NOT have to rise to a new, natural equilibrium. Instead, price equilibrium is found where demand meets this new supply. As a case in point, simply study the "market" impact on gold "prices" in the hours that followed the Brexit decision in the UK. As turmoil shook the global markets, gold shot higher and, at one point, was up nearly $100. However, within hours it had given back nearly half of those gains and then spent the remainder of the day in an unusual and very tight trading range while virtually every other "market" was rocked with volatility throughout the trading day. See below: Â 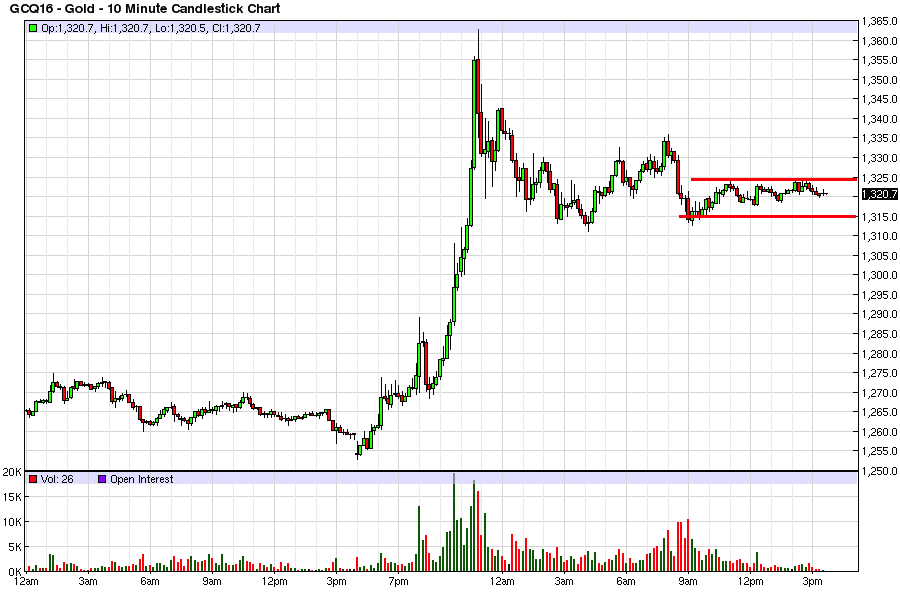 The all-important question of the day is: How and why was this done? First, the "how". At the end of each trading day, the CME Group issues an update that details total open interest changes for both gold and silver. Friday’s preliminary totals can be found here: http://www.cmegroup.com/trading/metals/precious/gold_quotes_volume_voi.html What does the data show? On Friday, with global markets in turmoil and precious metals markets rallying significantly, The Bullion Banks on the Comex issued brand new supply of nearly 60,000 new paper gold contracts! At 100 paper gold ounces per contract, this represents a potential future obligation to deliver almost 6,000,000 ounces of gold, should the Spec long buyers ever stand for delivery (which they won’t). So, ask yourself these questions:

Obviously, the answer to both questions is a big, bold NO! Instead, the market-making and price manipulating Banks simply played their usual game, writ large. In a desperate attempt to contain price, they simply issued these 60,000 new contracts and fed them to the Spec buyers. So next, ask yourself these vital questions:

So now let’s address the more important part of the question: "why". Simply put, these Banks are desperate and on the run. However, in their arrogance, they are still flailing away and attempting to postpone their demise. The minimal amount of physical gold that they do hold and utilize to backstop the paper derivative market is shrinking rapidly as investors and institutions around the globe seek gold as a safe haven against the financial devastation of negative interest rates. But not only are The Banks attempting to reverse this trend that is rapidly deleveraging their system, they are also desperate to protect their established NET short positions from additional paper losses. Recall that the CFTC generates something that it calls The Bank Participation Report every month and we write about this report almost every month, too. Here’s the latest:

contracts. After running this NET short position all the way to 195,262 contracts on May 3, 2016, the report for June showed a NET short position of 133,396 contracts. However, data for this latest report was surveyed on June 7, with price at $1247 and total Comex open interest of 496,330 contracts. By this past Tuesday, in the days before the Brexit total were announced, price had risen to $1318 and then fallen back to $1270. However, total Comex open interest had risen to 571,517 contracts and, by analyzing the latest CFTC-generated Commitment of Traders Report, we can safely estimate that The Banks were likely NET short at least 180,000 Comex gold contracts. Putting this all together, while price rose from $1060 to $1270, these 24 Banks added about 150,000 contracts of NET short liability to their Comex trading operations. So, with a NET position of 180,000 contracts short and with every contract representing 100 ounces of paper gold, the paper losses to these Banks for every $10 move in the gold price amounts to about $180,000,000. Multiplying that out…When gold was up nearly $100 early Friday, these Banks were on the losing side of a $1,800,000,000 move. Even for the likes of JPM et al, that’s a lot of fiat! So, what did they do? Like any arrogant and addicted gambler, they doubled-down! They put "good money after bad" and, in doing so, likely increased their NET short position to nearly 250,000 contracts! All of this in order to suppress price and get it back under their control. This also allows them to somewhat control the message gold was sending. Can you even imagine the headlines if gold was up $200 yesterday? By holding the gains to just $50, The Banks hope to:

In the end, what’s the point of this post? First and foremost, it’s simply the latest installment of our efforts to shine the light of truth upon the incredible fraud and sham that is the current paper derivative pricing scheme. The Comex-derived price is not at all related to the price/value of true physical gold. Rather, the price discovered on Comex is simply the price of the derivative, itself, with the price of this derivative determined by changes of supply and demand of the derivative. Barely any physical metal ever exchanges hands on Comex so it is entirely inaccurate to say that the price discovered there has any connection at all to the underlying physical. That said, though, we’ll leave you with one last link that you simply must read. Mark O’Byrne at Goldcore is closely-connected on the ground in London. In all of the hubbub of the Thursday and Friday, you may missed his daily report. If Mark and his sources are correct, we may be rapidly approaching the demise and destruction of these criminal Bullion Banks and their fraudulent pricing scheme. Demand for unencumbered, true physical gold is the key to ending this system and finding justice for gold holders, miners and producers around the globe…and this link may prompt you to think that we are closer to The End than at any other time in the past 40 years: http://www.goldcore.com/us/gold-blog/gold-lower-despite-panic-due-to-supply-issues-in-inter-bank-gold-market/ Friday’s Brexit vote truly was a game-changer and the single most important financial event since 2008. That it might accelerate the death throes of the Bullion Bank Paper Derivative Pricing Scheme is not something that is fully appreciated by the global gold "community". Hopefully, this post has helped you to understand where we are at present, the reasons behind the price action of Friday and the